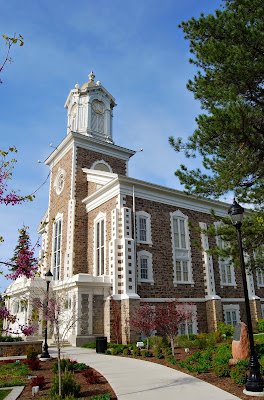 The Cache Community Wind Symphony will kick-off the 2015 Summer Noon Music at the Tabernacle with a selection of continental marches, a fantasy of Civil War tunes, a salute to the Armed Forces, and exuberant selections of Copland and John Williams.

The Cache Community Band program, and more specifically the Wind Symphony, consists of 65 excellent musicians who reside throughout the valley, ranging in age from 14 on up!  For 39 years, this band/symphony has been a major year-round contributor to the cultural and artistic landscape of Cache Valley.

Under the musical direction of Dan Stowell (since October 2013), the Wind Symphony has become a premier community musical organization, comparable with some of the best around the country.  The organization has ambitious plans as it continues to grow and excel.  For more information about the Wind Symphony, the CC Big Band, or the schedule of upcoming concerts and events, go to www.cachecommunityband.org 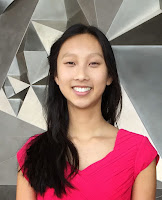 Jennifer Ban,16, will play Concert Etude Gnomenreigen (Dance of the Gnomes) by Franz Liszt, and Sonata in E-flat Major, Allegro, by Joseph Haydn.  She is is a Junior at Logan High School and has studied piano for 11 years and is piano student of Luke Hancock.  Jennifer has won top prizes at the USU Piano Festival each year since 2008, and was awarded the Performer of the Year and the Spencer L. Taggart Memorial Award in the USU Youth Conservatory multiple times.  Her piano solo performance received superior rating at Utah High School Activity Associations’ Solo & Ensemble Competition in the last three years.   In 2014 she was a finalist at Utah Symphony Salute to Youth Competition.  In 2013, she won piano concerto auditions and played with two orchestras.  Recently, she won 2nd Place at American Protégé International Concerto Competition and is invited to perform at Carnegie Hall in December.  Jennifer also plays the violin and is the concert master of her school orchestra and a member of “The 21 Strings” quintet.  She enjoys sharing her music and frequently plays in the community concerts, assisted living homes and Logan Regional Hospital.  She has a 4.0 GPA and is the President of math club and President-Elect of HOSA Future Health Professionals at Logan High School.  She likes reading, skiing, hiking and cooking. 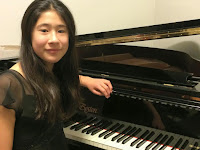 Rachel Smith,13, will play the Suite Ergamasque Prelude by Debussy.  Rachel is 7th grade at Logan’s Mount Logan Middle School and studies piano with Miho Everitt.  Rachel has been a finalist for both the 2012 and 2014 Utah Symphony Salute to Youth auditions and also the Beverley Sorenson Young Artist Competition 2013.  Among her awards are a performance in the Utah Symphony Youth Guild Recital, top prizes in various piano competitions, and she is winner of the 2015 Cache Symphony Orchestra Piano Concerto Competition.  Rachel has performed in the masterclasses with Weiyin Chen and Stephen Beus, and performed Haydn piano concerto with Cache Symphony orchestra last month. Besides piano, Rachel enjoys reading and is bilingual in Japanese and English.

Arianna (Annie) Worthen, 15,  is a Sophomore at Intech Collegiate High School and has been playing the lever harp for nine years.  She will be playing “River Flows in You” by Yiruma, “Love Me Like You Do” by Ellie Goulding, and “Take Me to Church” by Hozier.
Annie has played in several orchestras throughout middle and high school.  Last year, she placed first in the Senior Division at the Stratford-Loosle Young Musician's Competition held in Smithfield.  At age 13, she was selected to perform a harp solo on the Utah State University main theater stage and was a guest performer at the Mrs. Utah Pageant.  She has played the harp for numerous formal and informal occasions including several theater productions.  Each week she plays the harp at the Logan Regional Hospital for patients, staff, and visitors.  Annie cannot walk or stand unassisted due to an undiagnosed congenital Neuromuscular Myopathy.  This disease causes limited strength throughout her body, which prevents her from playing a pedal harp.  However, Annie loves playing her lever and electric harps. 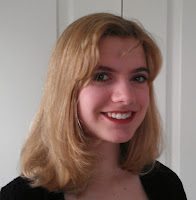 Emma Cardon,16, will perform Mendelssohn’s piano Concerto in G Minor, 3rd movement as well as her own composition.  Emma has won awards at the USU Piano Festival, the Cache Symphony Orchestra Concerto Competition, the Utah Music Teachers Association (UMTA) Piano Concerto Competition, and was a finalist in the 2011 Utah Symphony Salute to Youth Piano Concerto Competition.  She studies piano with Dennis Hirst at USU.
Emma is also a cellist and plays in the Logan High Orchestra, the RED Trio, and in the Utah All-State Orchestra in 2014 and 2015.  Emma began composing at age six, and has won awards in competitions including National Young Arts Foundation, USU Youth Conservatory, and PTA Reflections.  She recently won the national Olga Klein Nelson composition award.  She will study composition at Brevard Music Institute in North Carolina this summer. 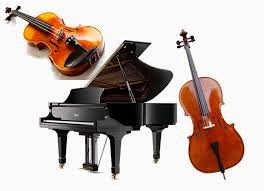 The USU String Students who will perform are violist Ellyn Thornton; cellist Josiah Cordes; and violinists Suni Norman, Jesse Massey, Rebecca Mitton, and Brynn Seegmiller.  (The piano accompanist is Jessica Roderer.)  All of these performers are students of the Fry Street Quartet, faculty of the Caine College of the Arts at Utah State University.

To be a music major in the string area (music education or performance) at USU requires joining a highly motivated group of students who receive an extraordinary amount of attention and care from their mentors. Lessons, orchestra, and chamber music are intensive and involve interaction with the entire string faculty.

The String Quartet Residency at USU's Caine College of the Arts was recently endowed by Dan and Manon Russell, an extraordinary gift for providing Utah State's String Program for future generations. 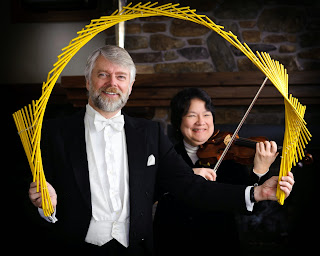 Richard & Rosemary Hatch of the Hatch Academy of Magic & Music will be joined by their son, pianist Jonathan Hatch, for an ensemble performance combining classical music and theatrical magic. Music by Bach, Kreisler, Saint-Saëns and Miyagi will be featured along with magic by Vernon, Punx, and Hecklau, among others. Highlights from their popular "Matinée Enchantée" programs at the Thatcher-Young Mansion will be included, along with several new pieces making their Tabernacle debut.

Although Richard holds two graduate degrees in Physics from Yale University, he prefers apparently to violate the laws of nature rather than discover them! His family moved to Logan in October 2010 and opened the Hatch Academy of Magic and Music, an educational institution, in the historic 1878 Thatcher-Young Mansion.  (www.hatchacademy.com)

Rosemary, a graduate of the Eastman and Yale Schools of Music, teaches violin at the Hatch Academy and performs with the American Festival Orchestra and the Utah Festival Opera Orchestra.

Jonathan studied piano with Paul Krystofiak at St. Thomas University in Houston and with Sophia Gilmson at the University of Texas before joining his parents in Utah. He is currently active as a visual artist, having had gallery exhibitions of his works in Logan and Salt Lake City. 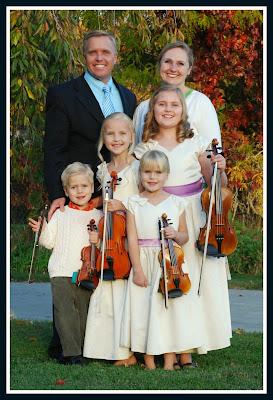 Hartstrings perform a repertoire of sacred, classical, folk, and broadway songs anything from Orange Blossom Special to Lloyd Weber's Pie Jesu. The group consists of Brody and Corine Hart and their four children. Brody sings and plays the piano and organ. Corine and all of the children sing and play the violin. Hartstrings has performed numerous times on Temple Square for the Families Making Music concert series, Temple Square Concerts in the Park summer concert series, and First Night Celebration. They performed last Christmas in the Logan Tabernacle for the first time and are thrilled to be back this spring. As a family, they have performed together as far away as India and Brazil.

Brody Hart is a member of the Mormon Tabernacle Choir. He and his wife perform on a monthly basis in the Conference Center on Temple Square where we they play piano and violin duets that Brody arranges. Brody has played piano for LDS artists like Alex Boye, George Dyer, and Jenny Jordan Frogley in concert. He has been asked to arrange music and perform in small groups for President Monson and other leaders of the Church of Jesus Christ of Latter-day Saints.  Brody received his bachelor’s degree from the University of Utah, and his doctor of dental surgery degree from the University of Michigan. Brody works as a dentist in West Jordan, Utah.

Corine Hart has a violin performance degree from the University of Utah where she studied with Ralph Matson, concertmaster of the Utah Symphony. In 1999, Corine performed in Nauvoo, Illinois as a young performing missionary where she met her future husband, Brody.  Corine is a member of the Orchestra at Temple Square and accompanies the Mormon Tabernacle Choir on their weekly broadcasts and on tour. Corine maintains an active teaching studio in Salt Lake City.

Makenzie Ann Hart, age 12, studies violin with Deborah Moench.  Last year Makenzie was featured as a solo violinist during the General Women's Meeting of the Church of Jesus Christ of Latter-Day Saints. She was seen by millions around the world on television playing her violin.  Makenzie is a member of the Gifted Music School in Salt Lake City on full scholarship.

Eliza Mary Hart, 10, is a member of Rocky Mountain Strings. She studies violin with Deborah Moench. She recently returned from Minneapolis where she performed with the Suzuki Youth Orchestra of the Americas. In 2013, Eliza received a Reflections National Award of Merit for her violin composition. Eliza has received a superior rating in the National Federation of Music Clubs festival for the past 5 years. Her passions include drawing, painting, sculpting, hiking, camping, and boating.

Ivy Grace Hart, 8, studies with Deborah Moench. She has received superior ratings in the National Federation of Music Clubs festival the last 3 years. Ivy also studies the piano. She has daring tastes: she enjoys escargot, sushi, sashimi, and calamari. Ivy wants to be a chef one day. 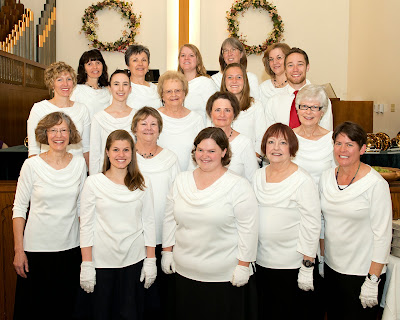 The Westminster Bell Choir and the Belles of Westminster, under the direction of Cathy Ferrand Bullock, will feature arrangements of familiar hymns and praise songs, a Led Zeppelin classic rock favorite (you’ve never heard “Stairway to Heaven” played quite like this!), a new composition from Westminster ringer Jill Bowers, and a bell sextet with accompaniment by pianist Ali Snow.

The bell choirs are interfaith groups sponsored by Logan’s First Presbyterian Church. The 20 ringers range from high school to retirement age, represent a number of local churches and wards, originally hail from all over the country, and have anywhere from a few months to a few decades of ringing experience. The groups rehearse from August through May. During those nine months, they typically give a couple dozen performances in churches, wards, retirement apartment complexes, nursing homes, and other venues. They have participated in the American Festival Chorus’ Christmas concerts for several years. One of their most enjoyable activities has been their annual trip to the Utah State campus to flash mob various classes at the end of the fall semester.

Posted by tabernacleconcerts@gmail.com at 4:42 PM