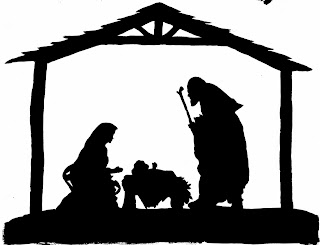 "Tidings of Comfort and Joy"
7:00 p.m.
All are welcome
Free to the Public 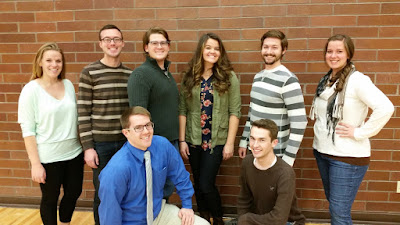 "It's Christmastime" is a vocal and instrumental music spectacular for the whole family! Talented performers from Utah State University will present an array of Christmas classics.  Start off your holiday season and get into the spirit of Christmas with the musical artistry of many talented vocal soloists and instrumentalists.  They come from many musical backgrounds and to share their love of music and love of the Christmas season with this performance. 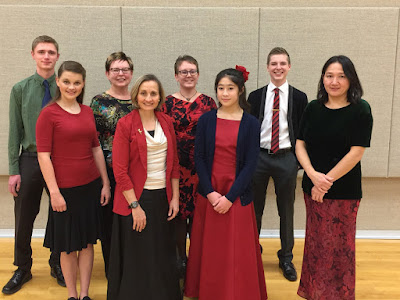 The evening selections will range from classical to modern arrangements of Christmas music performed by cellist Julie Huppi, flutists Jo Hays and Allyson Bailey, vocalist Bethany Anderson( vocalist), and pianists Karson Checketts, Rachel Smith, Nathan Merrill and Miho Everitt.
Julie Huppi, cellist, earned a Bachelor of Music Degree from USU in 1983 with an emphasis in elementary and secondary education. Julie was named Utah ASTA Private String Teacher of the Year in 2004 and earned Suzuki Teacher Certification in 2007.  She has been a private studio teacher for cello/bass for the past 34 years.  She also enjoys playing with various ensembles and orchestras, and volunteers many hours helping others in the community to find the joy of music.
Jo Hays  began playing the flute in 1978 and has a Bachelor's degree from USU  in flute performance and a Bachelor degreein mechanical engineering from Univ. of Memphis.  While at USU she played principal flute in the Symphony Orchestra and Wind Orchestra, and performed in the Caine Woodwind Quintet, Música Viva Chamber Ensemble, and the Flute Choir.  Jo had a fifteen-year career designing medical implants and instruments for hip, knee, shoulder, and spine surgery. She is now patent agent who assists inventors in patenting their ideas: maywoodip.com.
Allyson Bailey is a graduate of Utah State University with a Bachelor of Music in Flute Performance and a Masters in Accounting.  She has been playing the flute for 27 years and currently works as a Business Manager in the  Caine College of the Arts. In the past Ally has played in HiFalutin' Flute Choir and currently plays with Cache Symphony Orchestra and the Quintessence Woodwind Quintet.
Bethany Anderson is a sophomore at sky view high school.  She plays the piano and sings. She takes private vocal lessons from Dana Slabaugh on the USU campus.  Her love for singing led her to musical theatre where she has had the privilege of working with local companies such as Utah Festival Opera Company, Music Theatre West, Four Seasons and Cache Theatre Company. She is grateful for every opportunity she has to be able to sing and is blessed to have so much support in the valley.  Bethany is now involved with Sky View's Bella Voce choir along with their drama department.
Karson Checketts,15, is a Sophomore at Sky View High School where he is a member of Encore, Sky View's show choir.  As a  pianist he
was a recipient of the Stratford Loosli Young Musicians Competition Award this year in May.  Karson's favorite composer is Jon Schmidt.
Rachel Smith,13, is a 7th grader at Mount Logan Middle School. She studies piano with Miho Everitt.  In April, she has performed a concerto as soloist with the Cache Symphony Orchestra and was a winner of 2015 Cache Symphony Orchestra Piano Concerto Competition.  Rachel has been a finalist for both the 2012 and 2014 Utah Symphony Salute to Youth auditions and also the Beverley Sorenson Young Artist Competition 2013. She won many top prizes in various piano competitions and among her awards are performance at the Vieve Gore Concert Hall at Westminster University, Abravanel Hall lobby, Logan Tabernacles, Utah State University performance hall, Utah State University Kent Concerto Hall.  Rachel enjoys reading and is bilingual in Japanese and English.
Nathan Merrill, is a senior at Sky View High School.  Nathan enjoys playing the piano and has played previously for the Tabernacle concert series. He is the reigning National Champion in VEX robotics competitions and devotes much of his time developing innovative robotic solutions.
Miho Everitt was born in Osaka, Japan and started studying music at the age of 4. At age 9, she became a student of Virtuoso Jorg Demus.  She won the All Japan piano competition at age 9 and continued to win competitions in Japan including the All Japan soloist contest.  She holds a bachelor's degree in piano performance from Soai Univ. (Osaka)  She performed during Kazimierz Gierzod's master classes.  She also accompanied various instruments, voices, operas, orchestra and bands.  She enrolled in Master's program in piano performance  at University of UT and studied with Susan Duehlmeire.  Miho enjoyed playing for the Ballet at the U of U ballet department . She also accompanied a children's choir that toured various cities in the U.S. in 1992 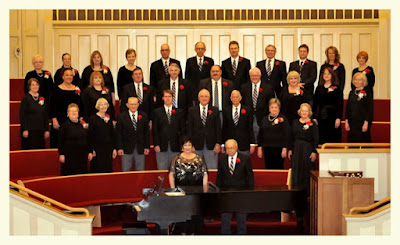 The “Towne Singers” will perform a variety of seasonal and favorite Christmas compositions.  Their guests, the “Interlude String Trio”, will perform classical as well as traditional Christmas carols.

The Towne Singers was formed in 1966 by Gene Tueller who was the Logan High choral director.  The Towne Singers is Cache Valley's oldest mixed choir, and directed by Gary Poore for the past four years, with accompanist, Terri Duncombe.  This year the choir added an Associate Director, Jaron Putnam who is one of USU's finest choral music students and is student teaching at Box Elder High School.  Jaron's musical expertise, youthful energy, and fun personality is a great addition to the choir.

The Interlude String Trio was formed in February 2014 by three colleagues of over 25 years, who have played together in chamber groups and orchestras in the valley.  The trio is comprised of Kathleen Lloyd,1st violin; Laura Morgan, 2nd violin; and Kennita Thatcher, cello.
Kennita Thatcher, cellist, has taught music education in Salt Lake City and has had private studios in SLC and Logan.  She performs with the trio and as a soloist, bringing the healing art of music to life.
Kathleen Lloyd, 1st violinist, maintains a large piano studio and has co-authored the Keyboard Gymnastics series, published by KJOS Music.  In addition to the string trio, Kathleen plays with the Cache Symphony Orchestra and America Festival Orchestra.
Laura Morgan, 2nd violinist, is the Assistant Director for Mountain West String Academy (Cache County elementary string program).  She has been a private teacher for over 30 years.  Laura also plays in the Cache Symphony Orchestra and with her musical family. 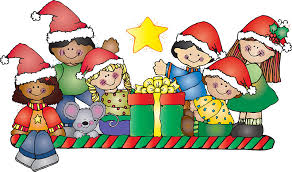 Ellis Elementary Program
There is nothing more enjoyable at Christmas time than hearing children sing favorite songs of the season.Ellis Elementary students will be singing a collection of festive Christmas melodies, focusing on the celebration of Christmas in any language.  Ellis Elementary, established in 1893, is the oldest continually functioning school in the state of Utah, teaching children K-5. 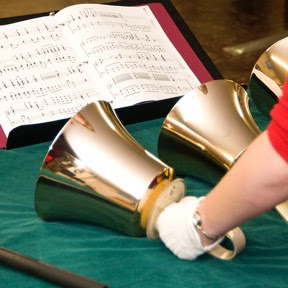 It wouldn’t be Christmas without the sound of bells!  The Westminster Bell Choir and Belles of Westminster will ring sacred and secular favorites, including “I Heard the Bells on Christmas Day” and “We Wish You a Merry Christmas.” The concert will also feature a piece for bell quartet, an appearance by the First Presbyterian children’s choir, and special music by Elisabeth (Buffy) Evans.
The bell choirs are interfaith groups sponsored by Logan’s First Presbyterian Church. The ringers range from college to retirement age, represent a number of local churches and wards, originally hail from all over the country, and have been ringing anywhere from a few months to a few decades. They are under the direction of Cathy Ferrand Bullock. 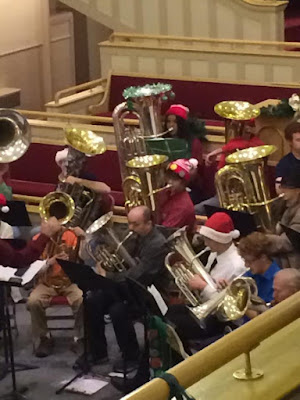 
TUBA CHRISTMAS, an international event, is a musical event consisting of different members of the tuba family of instruments that gathers annually to play Christmas music. This event has been performed in the Logan Tabernacle for the past six years. This year’s program includes a few songs from guest performers, the Bella Voce (women’s choir), from Sky View High School.
MERRY TUBACHRISTMAS is celebrating its 42nd Anniversary (1974-2015).  Created by Harvey Phillips, MERRY TUBACHRISTMAS 2015 concerts will be presented in more than 280 cities throughout the United States and in several foreign countries. Phillips was inspired to create TUBACHRISTMAS as an annual event honoring his mentor/teacher, the late great tubist William J. Bell (born Christmas Day, 1902). Every Christmas season, tuba and euphonium players of all ages, from specific geographic areas, gather to pay respect - through William J. Bell - to all the great artists/teachers who represent their heritage. Depending on the population of any given geographic area, TUBACHRISTMAS ensembles may attract multiples of 100 participants aged 8 to over 90 years!
Every TUBACHRISTMAS performance features traditional Christmas carols especially arranged by American composer Alec Wilder (died Christmas Eve, 1980).  The concerts pay grateful tribute to composers who have embraced these noble instruments with solo and ensemble compositions.   The warm, rich organ-like sound of the tuba-euphonium choir has won the ears and hearts of every audience. It is no wonder that TUBACHRISTMAS has become an established Christmas tradition in cities throughout the world.  The first TUBACHRISTMAS was performed on "The Rink at Rockefeller Center" on December 22, 1974.

Posted by tabernacleconcerts@gmail.com at 2:15 PM