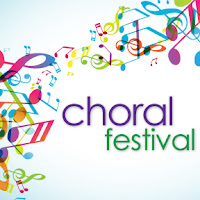 The Grizzlies, Mustangs, Indians, Bobcats will join together in Song!

The top choirs from Logan, Mountain Crest, Preston and Sky View high schools will each present several numbers then join together under the direction of Dr. Cory Evans, Director of Choral Activities at Utah State University.
The concert is FREE and everyone is welcome.

After each choir has performed, the combined choirs will sing Wolfgang Amadeus Mozart’s beautiful Ave Verum Corpus. Written in 1791 just six months before his death, it foreshadows aspects of the Requiem, one of Mozart’s masterworks. The evening will finish with the choirs singing Giuseppe Verdi’s Va, Pensiero from the third act of the opera Nabucco (1842). The rousing song is better known as the Chorus of the Hebrew Slaves.

Dr. Cory Evens also serves as Music Director of the Northern Utah Choral Society and as Executive Director of Music Reservata of Utah. Cory has also served as Musical Director of the Arizona Mormon Choir and
Zion's Youth Choir of Florida.
A native of Salt Lake City, Dr. Evans received a Bachelors degree in music education from Utah State University, a Masters degree in vocal performance from the University of Florida, and a D.M.A degree in choral conducting from Arizona State University. As a tenor soloist, Cory has recently premiered Ophelia in Seville by Miguel del Aguila with Utah State University's Musica Viva. He has soloed with the Vancouver Symphony and Utah Chamber Orchestra, and appears on the CD Sing Me to Heaven, released on Integra Classics.
He and his wife, Jennie, live in Nibley with their girls, Ellie and Jessie.

The Logan Tabernacle is at 50 North Main, Logan, Utah,
with excellent parking behind the building.
Please join me in supporting our valley high school choral students
by attending this joint concert.     KM
Posted by Unknown at 12:18 AM