April Brings Showers and 3 Vocal Events to the Logan Tabernacle

Well, I am not sure about the showers.  There might even be snow showers since we haven't really had our full share of snow yet in Cache Valley.  Or you may think we have had enough already.  Here are following events at the Tabernacle during the month of April so you might calendar those of interest to you.  Remember, all of the Concert and Lecture Series events are FREE to the public. 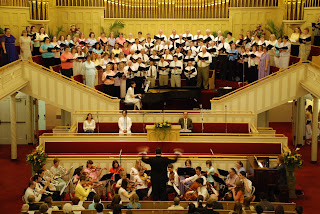 
"Love's Greatest Gift," a cantata for choir and orchestra, was cowritten by Cecelia Benson, Karen Carter, and John Carter of Logan, Utah and based on a text by the late Hortense Richardson of Salt Lake City.  Performed yearly during the Easter weekend at the Logan Tabernacle in downtown Logan, Utah, Love's Greatest Gift has touched the lives of countless individuals who have participated in its performance and listened to its message. This Cantata is returning to the tabernacle in Logan, after a year absense.  It has become an Easter tradition in Logan.  The performances on Saturday and Sunday will be at 7:00 pm and there is no charge for admission.
The text of this cantata begins where most leave off, at the Resurrection of Jesus Christ and follows through to His ascension into Heaven.  The role of Mary will be sung by Heather Shepherd, a soprano residing in Atlanta Georgia, and the role of Christ will be sung by Jonathon Weiss, from Logan, Utah.   Many other local soloists will be featured in this year's performance.
This year's performance will mark the 14th year that the work has been performed.  It's original performances in 1996 and 1997 were on a smaller scale, but when the invitation to present it in the tabernacle was extended in 2000, the piece was expanded to include full orchestra and will be narrated by Bruce Newbold, who has appeared in television and motion pictures including 17 Miracles, Everwood, Touched by an Angel and many more. He also recently released a Novel, "Baseball Box Prophecy"
We invite all to come and share in this Easter Celebration on April 7th & 8th, in the Logan Tabenracle.

April 21, 2012  Saturday   12 noon
Combined Concert with Cache Children's Choir and Los Angeles Children's Choir
This surely will be a special event if you love to hear those pure voices of children.
More details to come and be sure to notice the 12 noon time.

April 26, 2012 Thursday 7pm
Cache Valley High School Choir Festival
Four of the area high schools will come together to present a night of vocal beauty.
Logan, Skyview, Mountain Crest and Preston High Schools
will bring their choirs to this event.
More details will come closer to the date of the Festival.

If you have friends who may want to know of this blog, please send a quick email and have them FOLLOW us for information as we schedule it.
Karyn Madsen, committee member